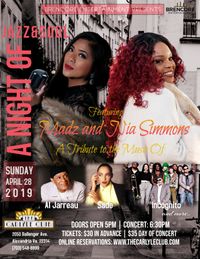 A Night of Jazz & Soul featuring Madz and Nia Simmons

Join us for a wonderful evening of music at the Carlyle Club where two of the area’s finest songstresses, Madz Johnson and Nia Simmons, will present a tribute to the music of legendary artists who have left an undeniable mark on the world of Jazz and Soul: Al Jarreau, Sade, Incognito and more. Madz Johnson is a Filipina-American singer, songwriter, saxophonist, and arranger from Virginia. She is a soul, funk, and jazz artist who holds 3 world tours under her belt in Europe, Scandinavian countries, Canada and the United States. Madz has opened for big artists in the Philippines and the U.S. such as Chico Debarge, Bunny Debarge, Randy Debarge, Klymaxx, Lakeside, P-Funk Connection, Marcus Johnson and more. She released her first original song in February 2015 entitled “SMILE” that’s being aired in the U.S. and various countries worldwide. http://www.madzjohnson.com. Nia Simmons is a vocalist, songwriter, arranger, and international independent recording artist from the Washington DC metro area. Her debut album "A Songbird's Journey" peaked at #13 on the UK Soul Chart, which led to her first European tour of the United Kingdom and Netherlands. Nia has performed as a headliner at notable local venues, and has shared the stage as a background vocalist for internationally acclaimed artists such as Regina Belle, Howard Hewett, Me'lisa Morgan and others. This songbird's silky, smooth vocals will catch your ear and move your spirit. http://www.niasimmons.com