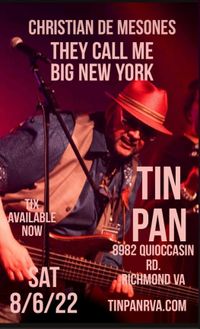 2021 was a breakout year for bassist and composer Christian de Mesones. His debut solo album, “They Call Me Big New York” features 25 national recording artists, has garnered multiple top-ten singles and is closing in on 2 million streams on Spotify. His 2020 single, “Big Tall Wish” was featured on the Dave Koz Lounge show on Watercolors Sirius XM and reached #6 on the Groove Jazz/RadioWave chart. Jazziz Magazine featured a fan favorite from the album, “Year of the Dragon,” in its World Music edition, and the song reached #1 on the Radio Guitar One Network. His latest single, “Hispanica (Instrumental)” featuring legendary pianist Bob James, delivers de Mesones his greatest chart success to date, reaching #1 on Billboard’s Smooth Jazz Airplay chart and landing solidly near or at the top of MediaBase, RadioWave, SmoothJazz.com, and Groove Jazz charts. de Mesones also reached #1 on Allen Kepler’s Smooth Jazz Network Top 100 Chart, was one of their Breakout Artist nominees for 2021, and was nominated as Instrumentalist of the Year on SoulTracks.com for the second year in a row. de Mesones rounded out a stellar year as the STLSmoothJazz.com Central Standard Time Show’s Artist of the Year for 2021, and Brian Culbertson featured “Hispanica (Instrumental)” in his SiriusXM Radio Watercolors “Year in in Review” show as one of the Top 25 Songs of 2021.