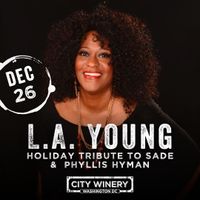 City Winery Washington DC presents L.A. Young – Holiday Tribute to Sade & Phyllis Hyman live in concert on Monday, December 26 at 7:30 PM. L. A. Young grew up in the midst of a musical revolution in 1980s Ohio; the epicenter of Funk. A fusion of R&B, Rock and Blues, Funk defines so much of L. A.'s core raised on bands including Cameo, the Ohio Players, Lakeside and Dazzband. Also heavily influenced by MoTown and Pop. L. A. has been described as Chaka Kahn meets Phylis Hyman. Phyllis, however, is L. A.'s alter ego; a contralto, L. A. possesses a haunting similarity to her alto range, timbre and love of ballads with lyrics that tug at your heart. L.A. is recording several original songs for a forthcoming CD including songs by multi Grammy nominee, Vinnie Barrett.